The International 3 is pleased to announce Small connecting part, the first solo show by emerging artist Hannah Dargavel–Leafe. This, the second exhibition in our new temporary location, comprises new and existing works that reveal the artist’s core interest in the rhythms and structures of the city and in particular their sites of flux. Hannah’s practice is research-led and her investigations are realised using a range of media including sound, drawing, sculpture and installation.

Emblematic of a city in transition and a symbol of renewal, the repeated image of a crane finds print and sculptural form within the artist’s work. Against a backdrop provided by the risograph print, ‘Crane Motif Wallpaper‘, concrete and steel structures of varying size give platform to a series of 3D printed crane-like sculptures. Unlike their real-life counterparts however, the structures in ‘Crane Motifs (performance)’, do not conform entirely to a recognised design or behaviour. These modified structures bend around corners, teeter on edges and lay horizontal on their supporting surface and together connote a pared back city-scape of the future.

Rather than the future however, the piece, ‘All the keys to all the locks of a demolished building’, provides a document of the past. Taking the form of a plaque-like steel structure with laser engraved text, the artist, as the title suggests, has transcribed the labels from a demolished building’s discarded keys. Mundane, (School kitchen), intriguing, (Mauritius) and disconcerting in equal measure, (Oce next to toilet deathrow) , the work provides a poetic memorial to a unknown building and a cipher for a city in flux.

“In my practice, structures, diagrams, musical notation, maps and inventory are all used  to record or instruct how the object can perform in space. Imagine we could see time like we can see a landscape: near and far all at once. Architecture becomes analogous to time and sound becomes physical as a way to describe space.” – Hannah Dargavel-Leafe.

Hannah Dargavel-Leafe (born 1987, London.) graduated from Manchester Metropolitan University with a BA Hons Fine Arts in 2010. Since that date she has exhibited in group exhibitions at The International 3, Bluecoat in Liverpool, and at ICA London. In 2012 she was the recipient of a Cornerhouse Micro Commission (Manchester) and in 2012 – 2013 was selected for the Artists Access to Art Colleges residency at Manchester School of Art. In 2014, Hannah will begin her MA Fine Art at the Slade School of Fine Art in London.

The exhibition will be accompanied by a commissioned text by Dr. Steven Gartside  and a limited edition artwork. More details to follow.

The International 3 is supported by funding from Arts Council of England and through the generous support of its Founder Patrons: Bob and Hazel Miller, Dr. Sezgin Ismail, Robert Devereux, Martyn and Valerie Torevell, Jo and Allan Melzack and those that wish to remain anonymous. Founder Artist Patron: Rachel Goodyear 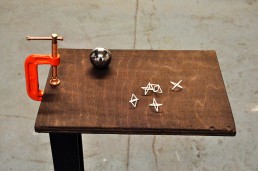